What’s a Senior to Do? Hunter Richard 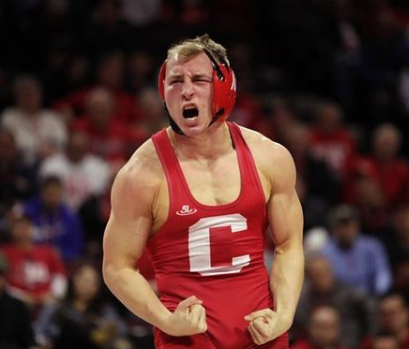 The referee slapped the mat and Hunter Richard rose to his feet and screamed. Matside, his coaches and teammates exploded with excitement.

Richard’s pin of Gerard Angelo of Rutgers at 149 pounds was ultimately the difference in the Big Red’s 18-16 road victory in January 2020. And it was a moment Richard had been thinking about for years.

“I was a Cornell wrestling fan since I was little,” Richard said. “I grew up watching guys like Kyle [Dake] win big matches and I always wanted to win a match for the team. To see that come true at Rutgers was such a sweet feeling; an out of body experience. It was pure happiness.”

Two days later, Richard squared off with Virginia Tech’s Bryce Andonian in a wild, back-and-forth affair in which the Big Red wrestler prevailed 8-7.

“To follow up and beat a ranked guy [Andonian] on Sunday – that was a good weekend for me,” he said. “It was where my season turned around and I really, truly believed I could finish on the podium. The second half of the season — we were a different team overall.”

The 2019-20 campaign began with a number of Cornell’s stars – Yianni Diakomihalis, Vito Arujau and Max Dean – taking an Olympic redshirt. It was unclear what the season would look like with three All-Americans on the sidelines.

“Last year was pretty crazy,” Richard said. “With the guys taking the year off, not many people gave us a chance of having any sort of success. We basically had to figure out our identity and we got off to a slow start. It’s different when you don’t have those guys, who you pretty much knew were going to win just about every time they got on the mat. But after Christmas Break, we just focused on wrestling hard and giving everything we had. We didn’t make it easy on anybody. It was infectious. We built an identity of underdogs who believed we could beat anyone. We had a lot of fun.”

That momentum carried through to EIWAs, where Cornell was projected to finish fourth, but took second as nine of the ten Big Red wrestlers met or exceeded their seed.

Richard showed his progress as he opened with a pair of major decisions, including a 12-1 drubbing of Bucknell’s Matt Kolonia, a wrestler Richard edged by a point on a last second takedown during the opening weekend of the season. In the EIWA semis, Richard topped Lehigh’s Jimmy Hoffman 7-5 to clinch a spot at his first NCAA tournament.

And then it all came to a screeching halt.

“I remember leading up to the Nationals, COVID was coming, but it didn’t seem like a big deal yet,” Richard said. “At EIWAs, no one was really worried. Slowly, it got worse and worse. Professional leagues started cancelling and the chatter about whether Nationals would happen or not got louder.”

Richard had just finished an individual workout at the Friedman Center with Dake when he received the news – no NCAA tournament.

“To be honest, at that moment, I couldn’t process it,” he said. “It took me a week – almost until the tournament was supposed to be happening. I was at home, eating, not down to weight, thinking I should be in Minneapolis. You earn the opportunity to compete at Nationals with blood, sweat and tears and give up a lot. It’s tough to have that opportunity taken away, especially because it’s completely out of your control.”

As COVID continued to be a factor into the fall, nine members of the Cornell roster withdrew from school for the first semester just in case of another season interruption. Richard wasn’t one of them.

“Even if this season got cancelled, I knew it wasn’t the end for me,” Richard said. “I had a season-ending injury at the South Beach Duals during my sophomore year and I have two years of eligibility left. I was planning to wrestle this year and graduate in the spring. I want to go for my MBA afterwards, but you can’t compete in the Ivy League while in grad school, so I would transfer for my last season of competition. That’s at least what I was considering this summer.”

Over the summer, Richard was also considering his position in the lineup.

“I knew Yianni was thinking about going up to 149, so I got bigger,” Richard said, noting that he arrived in Ithaca in the fall over 170 pounds. “I was ready to wrestle anywhere from 149 to 165 – whatever was best for the team. I was ready to keep getting bigger or start cutting weight.”

The decision was never finalized, however, as the Ivy League announced the cancellation of winter sports on November 12.

“It was a feeling of – here we go again,” Richard said. “It wasn’t as big of a crushing blow as last year because we hadn’t even wrestled yet. We had a feeling it might happen, but it still stung. The coaches, the team, so many people sacrificed so much. I feel for everyone, but especially the freshmen who don’t even get the real feel of being on the team. We also know that the season might still happen and we won’t be a part of it. Sitting home and watching Nationals on TV – that would hurt.”

As soon as the news hit, the Economics major/Business minor in the College of Arts and Sciences knew the idea of graduating in the spring of 2021 was off the table.

“I’m not ready to leave yet,” Richard said. “I want to finish out my senior year here on my terms – not based on COVID. I’m taking the spring semester off and staying to wrestle another year at Cornell. I plan to stay in Ithaca and wrestle all semester while working too. We’ll be one of the best teams in the country next year. How do you walk away from that? I came in with Max, Yianni, Darm [Ben Darmstadt] – we’ve worked together and kept improving. It’s not time to leave yet. I may not be the most talented, but I think I’m an example that if you buy into the program, you will see success.”

Richard said he may not be the most talented, but his ability was obvious in high school. He was a three-time wrestling state champion, while also earning All-State honors at running back and linebacker on the football team. In fact, he holds the records for single season rushing and career tackles at Holland Patent High School. That multi-sport prowess was one of the factors that intrigued the Big Red coaches.

“On my recruiting visit to Cornell, Coach Koll talked about how he liked to recruit guys who played more than one sport. He said he really liked my athleticism and then said, ‘Once we teach you how to truly wrestle, you’ll be really good.’ It’s funny, I thought I already knew how to wrestle, but it turns out he was right. I needed to be taught the college style and I’m really thankful.”

After that visit, Richard picked the Big Red over Army West Point, Brown and Princeton.

“As a kid, you don’t really know if you’re making the right decision, you just go off a feeling,” Richard said. “I’m very grateful for the choice I made. The coaches here not only care about you as a wrestler, but as a person. They teach you to succeed not just in wrestling but in life afterwards. It’s the culture and it’s the little things – they’re always looking out for you. One example – last year the starters couldn’t go home for Thanksgiving because of the Ohio State dual. So Coach [Mike] Grey and his wife opened up their home and hosted us for Thanksgiving. The coaches and the guys care about more than just going out and winning.”

But winning is of course important as well and Richard has racked up 50 victories in his career to date, including 25 last season.

“It took me a while to transition from high school to college,” Richard said. “Coach Koll believed in me out of high school and has put so much into making me better. So has [assistant coach] Gabe [Dean]. He has spent a lot of time with me – lifting, individual workouts, just talking. Toward the end of last season, I also started doing individuals [practice] with Kyle and picking his brain. Having Gabe and Kyle in my corner – you can’t ask for a much better duo.”

After spending so much time with Dean, Richard expected the Big Red assistant coach to perform the way he has after coming out of “retirement”, with a Senior Nationals title and a down-to-the-wire match with World Champion David Taylor.

“I’m not surprised one bit,” Richard said. “Nobody around here is. I’m just glad he’s back. He took some time off from competing and people seemed to forget how good he is, but those of us who see him in the room know. Gabe works like an animal.”

Richard has that reputation as well, as he looks to take his achievements to the next level in his final go-round in Ithaca.

“I want to not only get back to Nationals, but get on the podium,” he said. “Last season was a big confidence booster for me. I wrestled six of the top ten guys and was able to go with every one of them. I believe I’ve started to jump levels and I’m putting in the work.”

He gets to put in that work in a room that boasts plenty of Olympic hopefuls, national champs and All-Americans.

“I look around and there’s Kyle, Yianni, Gabe … some of the best guys in the world,” he said. “It’s pretty special, but the craziest thing is that seeing them, being with them – it’s just another day. Being with that kind of talent is part of being on this team and part of this culture. I’m grateful to learn from everyone around me. It does wonders for my wrestling. When I graduated from high school, I said I was excited to start at the bottom and work my way back up again. I know I’ve become a better wrestler and a better person.”

Next, he wants to be part of an NCAA title.

“At the end of the day, I’m very grateful to have the opportunity to wrestle for a national championship contending team,” Richard said. “Coming from a small public school in New York – there are a lot of kids that would give up a lot to be in my position. I’m thankful for every chance I get to wrestle with a Cornell ‘C’ on my chest.”

Each time he goes out there is another opportunity for Richard to record a match-clinching pin that he dreamed of as a kid.

For those with a FloWrestling account, here’s the Hunter Richard pin against Rutgers: