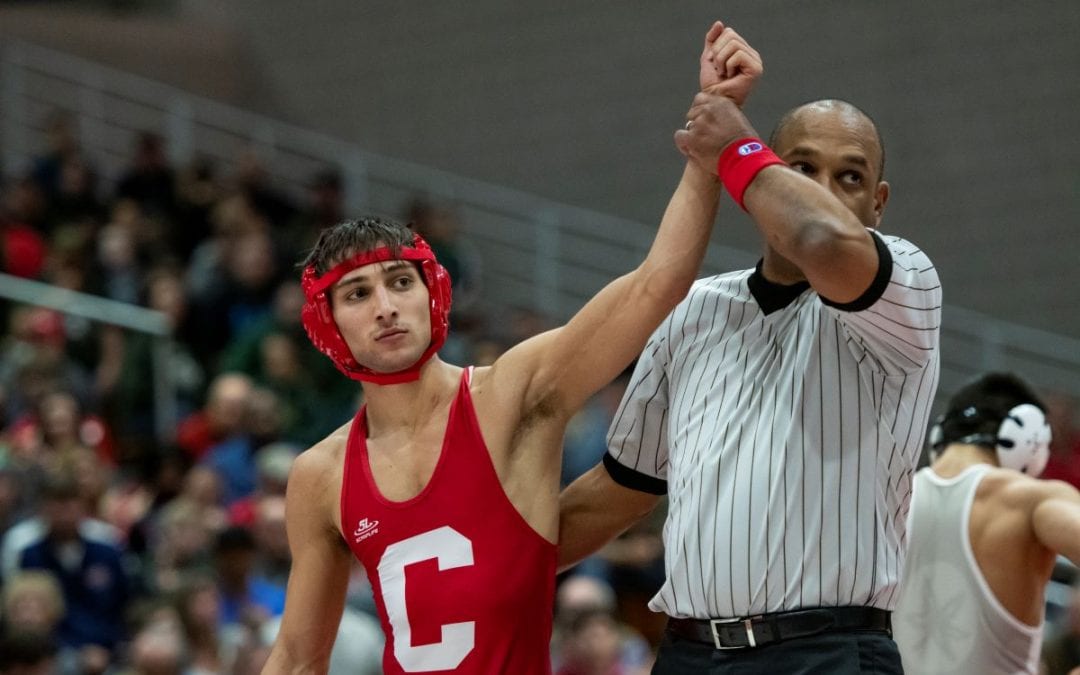 “Did you even sweat?”

The comment from a teammate on Vito Arujau’s instagram post about his successful weekend was obviously a joke. However, there’s no question that Arujau looked dominant and in control from start to finish as he captured the USA Senior Nationals championship at 57 kilograms on Sunday in Coralville, Iowa.

“There’s always room for improvement, but overall I feel like I did the majority of things right,” Arujau said. “It wasn’t the best version of me – there are things I can do better. But it was enough to tackle the competition.”

He tackled the competition in just over 13 minutes of total mat time, outscoring his opponents 56-9 along the way. In fact, four of his five bouts ended in a technical fall, including a 13-3 victory in the finals over Dylan Ragusin.

The only match to go the distance was Arujau’s 11-6 semis win over NCAA finalist Jack Mueller in a battle that was scheduled to take place in September at the Beat the Streets fundraiser. A flare up of a previous injury forced Arujau to miss that New York City event, but he said he wasn’t out of training for long and the work he put in with coach Mike Grey and partners like Rustam Ampar, Yianni Diakomihalis, Evan Henderson, and Dom LaJoie with the Spartan Combat RTC had him feeling confident entering the event.

Arujau trailed 6-4 after the opening period, but blanked Mueller 7-0 afterwards.

“I made the adjustments for the second period – better attack angles and used the edge better,” Arujau said. “I went out and wrestled the match the way I wanted to after the break. He’s a very good opponent, but I think I was able to use my diverse skill set.”

“It’s a totally different lifestyle,” Arujau said. “Two practices a day and they were intense. Wrestling occupied the majority of my day. I had to take care of my body afterwards – it was grueling. I definitely made improvements. The big thing was fine tuning certain positions; finding the optimal thing to do. I can hit some crazy things, but I need to do what will be successful against the best.”

He had the chance to wrestle some of the best during the year, taking third place at the Senior Nationals in December 2019 with an impressive 5-1 showing that featured victories over Nick Suriano and Zach Sanders and a lone loss to champ Spencer Lee.

Arujau also traveled to Russia to compete at the Ivan Yarygin Grand Prix, an event his two-time World Champion and Olympic medalist father, Vougar Oroudjov, won multiple times. In the opening round, Arujau and Alexander Sobanov went back and forth in a contest eventually won 12-10 by Sobanov.

“The Yarygin is an extremely prestigious tournament where you have the best of the Russians and the countries in that part of the world,” Arujau said. “Everyone there is a powerhouse. It was a cool experience and I’m glad I went, although it didn’t turn out the way I wanted. I’m sure I’ll return and do better. [Sobanov] was more freestyle-savvy than me and I had a lapse in my bottom wrestling.”

Arujau has been concentrating on that aspect of his game.

“I definitely work on bottom any time I get the chance,” he said. “I don’t think it’s bad, but compared to my neutral offense or my turns on top, it’s not on the same level. Getting turned on bottom can widen the gap quickly in high level matches. There are a lot of people working with me – Mike [Grey] is an amazing wrestling mind and Ahad Javansalehi, our Greco coach helps, and so does Yianni. We also have Kyle Dake in the room – he would probably split me in half if he turned me, but he definitely helps with technique.”

While Arujau has been focused on freestyle technique for the past 12-plus months, he soon will shift at least some of his attention to folkstyle.

“If there’s a college season, I’ll be wrestling in it,” Arujau said. “Right now it looks like we’ll have a season and an NCAA tournament. I’m hopeful. I’m really excited about our team.”

He’ll be a strong title contender at 125 pounds, where he nabbed fourth at Nationals as a freshman.

“The NCAA season was a grind, but when it was over, I wanted to do it again,” he said. “I’m excited to get back to it. I think the high intensity is what I need. It’s also very convenient that my college and international weight class [125 pounds/57 kg] is basically the same. So when the NCAA season is over, my weight will be under control, I’ll be in shape and ready for the [Olympic] Trials [spring of 2021].”

However, the just-announced Senior World Championships to be held in Serbia in December 2020 could throw an interesting twist into Arujau’s next few months.

“From what I’ve heard, most people in other countries assumed the Worlds would be canceled,” he said. “The fact that they’re having the tournament, whatever precautions they’re taking, I’m all for it. I don’t know if the USA is sending a team. If we do, I don’t know how [USA Wrestling] will choose who goes. Will it be last year’s team? Will they hold another tournament to decide? Will Senior Nationals champs go?”

If USA Wrestling chooses the last option, Arujau would be joined by another Cornellian on the squad, as Big Red assistant coach Gabe Dean returned from a more than three year competitive hiatus to win the 86 kilogram Senior Nationals title this past weekend.

“Wrestling Gabe is the closest you can get to being mauled by a bear,” Arujau said. “His defense is insane. I had a strong feeling he would win. He never stopped wrestling. He’s not the type of person to be out of shape. He constantly works out, has high standards for himself, eats well – is all-around disciplined. He was a little upset with the finals [a 1-1 criteria win over Nate Jackson]. He wanted to dominate everyone. I wouldn’t want to wrestle against him.”

Many 57 kilogram wrestlers could say the same about Arujau, but he still feels like he has a lot to prove.

“Of course, I’ve heard people saying I have no chance at 57 [kg],” he said. “Spencer Lee, Thomas Gilman, Daton Fix – they’re the upper echelon of the weight. They deserve to be there. But I believe I’m up there skill wise and I believe I can make the leap into that class. Making that World and Olympic team, winning at those events – that’s the end goal.”

Arujau, a Cadet and Junior World Silver Medalist, is certain that he’s in the right place to advance toward those end goals.

“Cornell offers me all the tools I need to get better,” he said. “I’ve seen other programs, I’ve traveled to other schools to train and I wouldn’t want to be anywhere else. I have so many great friends on the team that I’ll have for life. The connections are invaluable. Everything I could want, I have. Training partners? Yes. Amazing coaches? Yes. Best facilities in the country? Yes.”

The talent, the toughness, and the support team are in place. Arujau’s opponents are sweating.