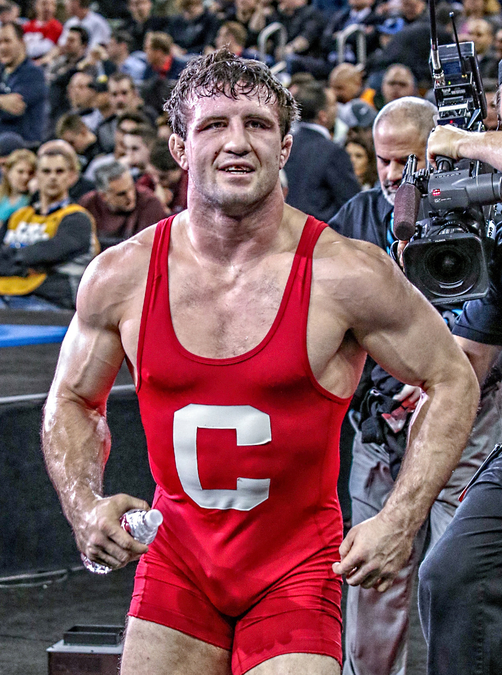 The following is from a phone interview with Cornell assistant coach Gabe Dean on Friday, November 13 – the day after the Ivy League cancelled all winter sports. Gabe will be facing World Champion David Taylor at 86 kg on November 24 at the Nittany Lion Wrestling Club event live on Rokfin.

When did you start to feel that the season was in jeopardy?

Gabe Dean (GD): I would say about a week ago. I’ve always had my doubts about the season happening and I knew being at an Ivy League school, it would be difficult with everything going on with the pandemic. But about a week ago, I really started to feel the heat and it became much more of a reality.

What was your reaction when you got the final word?

GD: Disappointment. Not in our athletic department because I know the people there did everything they could. But I’m disappointed that the upper level of administration couldn’t find a way to make it work.

How did you break the news to the team?

GD: We got on a Zoom call right after we got the official word. It was tough. You think about a kid like Hunter Richard. A senior and two years in a row he won’t compete in the national tournament. He could easily be an All-American and compete at the highest level. There are plenty of examples like that across the board in the league.

What was the reaction of the guys on the team?

GD: They were sad, disappointed. But I’ll tell you what – they were up this morning lifting and working out. That’s a testament to our team and the character of our guys. It makes me proud to be part of a culture that continues to move forward, doing things that are in our control. They were definitely disheartened, but they were ready to go the next day.

Several Cornell wrestlers sat out the first semester. Would you expect them to now remain out of school for the second semester?

GD: I would say yes. I don’t think they will re-enroll until the fall.

Do you think others will join them and sit out the second semester?

GD: It just happened, so it’s hard to say. But I do think some kids will. Some are definitely thinking about it.

You’ve recruited really well. Are you hearing any feedback from recruits who have yet to step on campus about these latest developments?

GD: Yes. I spent most of last night talking to families. There were a lot of discussions about why this is happening at this point. We’re in November now – there’s time before the season starts. Most schools haven’t made any decisions yet. There have been wrestling tournaments going on for months now – youth, middle school, high school, senior level and we haven’t seen transmission through competition. I want the kids to have the opportunities they worked for. Luckily for us, everyone recruiting-wise is in a good place. We have great support from great families and great kids.

You said the guys were back to work this morning. What are you allowed to do at this time?

GD: We’re allowed to lift and run, which we’ve been doing. We can’t get into our facility until Phase III [in New York], though, and I don’t see that happening soon.

There was a lot of excitement about the team, including the young, talented upperweights. You had returning All-American Ben Darmstadt and NCAA qualifier Jonathan Loew, but were also welcoming in freshmen like Chris Foca, Lewis Fernandes, Jacob Cardenas and Julian Ramirez. [Max Dean and Brendan Furman were not enrolled]. Do you feel this group was ready to make an impact right away?

GD: I do. I was really looking forward to working with them. They’re all great kids with great heads on their shoulders who love to compete. They were excited to wrestle for national titles individually and as a team. It’s a heck of a group and I’m looking forward to seeing them get their chance as soon as possible. They’re more than ready.

Let’s switch gears to your recent wrestling. When we talked prior to Senior Nationals, you said you weren’t sure if it was a brief comeback or a longer term commitment to competing. Where are you now with your thought process?

GD: I couldn’t turn down the opportunity to wrestle the best guy in the world at 86 kg. That’s a challenge I couldn’t pass up. Overall my thoughts are a little mixed. I didn’t think coming out of retirement would be this eventful. I really decided to come back for the Flo event, and I didn’t expect anything more – but now here we are. I’m not allowed to do recruiting, I’m not on the road, and now there’s no season. So there’s no better time for me to test the waters, enjoy competing and make some money too. I’m taking it one step at a time. I’m not there yet, not thinking about the Olympics. We’ll see where I am in about 10 days.

How would you analyze your performance in your matches over the past month?

GD: I wasn’t totally prepared for the US Open. I jumped in at the last second and I think my last couple of matches showed that, especially offensively. I just wanted to win the matches rather than dominate. I felt really good going into the Flo event and I guess you could say it went extremely well until I tried to force a gut wrench. I was really disappointed because I felt like I was ready and I obviously didn’t train just to wrestle one match. Sometimes life smacks you in the face a little bit – and it did. But I woke up the next morning and started making adjustments and got back on the road to getting better.

You said after graduation that one of the reasons you stopped competing was that you weren’t having fun with Freestyle. Has that changed?

GD: Yes. I am having a blast now. I’m really enjoying myself. I hadn’t felt the feelings you get when you compete for a long time and I’ve really enjoyed every part of it.

How did the match with David Taylor come about?

GD: I got a text from [Penn State head coach] Cael Sanderson one night asking if I was interested. I negotiated a price and said yes. In turn, he’s gonna send some Penn State wrestlers to the card we’re working on for the Spartan Combat RTC. It became a win-win for both parties.

It’s not a big secret that Cornell and Penn State have not had a close relationship in the past decade or so. Do you sense that changing?

GD: I think so. Cael and I have had some pretty funny exchanges. I always wanted to start a relationship with him and I think this opened the door for Cornell and Penn State again. We’re hoping to continue to work together to build the sport. Penn State isn’t that far away from Ithaca and we can really do some great things together.

Kyle Dake has obviously wrestled Taylor many times. Is he helping you prepare?

GD: Kyle’s been helping me a lot. It’s been great having Kyle in the room and working with him. I know I have my hands full with David Taylor. I have to be able to match his pace and stay with him for six minutes. I’m definitely looking forward to the challenge. You don’t get too many opportunities in life to do things like this – to face the best guy in the world. I’m happy and excited to do it.